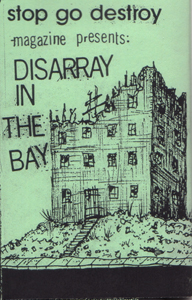 I put this tape together in the late summer of 2004. It's not an authorized compilation, I didn't ask any of the bands permission to use songs, so it's more of a glorified local mixtape that I happened to make 100 copies of. I sold it on the the Acts of Sedition Fall 2004 tour, and the idea was to sort of give people an idea what was currently happening in the Bay Area. It's what was happening, according only to my specific tastes and record/demo collection at the time, and of course I couldn't resist throwing in THREE of my current and ex bands into the mix.

Liner Notes
"Welcome to the audio component of Stop Go Destroy. Since the magazine doesn't really talk too much about local bands (especially anymore) this tape will give somewhat of an idea of the sounds that are going on around the words." 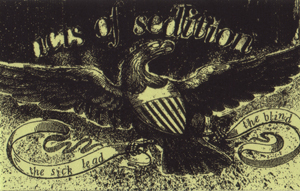 ACTS OF SEDITION:
THE SICK LEAD THE BLIND
SGD2
OUT OF PRINT

This was basically the first Acts Of Sedition seven inch, minus one song. I sent out about half of these to labels to see if they would put the seven inch out, but it ended up just coming out on Spacement Records, the Reno label that did our original split 12" with Bafabegiya. The song Knives And Cages wasn't originally going to be on the seven inch, and therefore wasn't on the tape, because we were going to put it on Paul Curran's Eastbay Thrashfuck Devastation Tape, which never came to be.

SIDE B
Same as side A 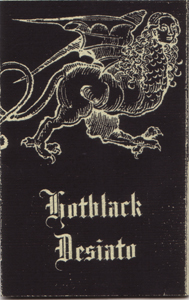 These songs were from a partial album session that was never finsihed, and one was intended for a split seven inch with Brutal Death that never happened. You can learn more about it HERE. You can read a review and download it HERE.

SIDE A
1. Rolling Joints Of Vengeance
2. Lovechild Miscarriage 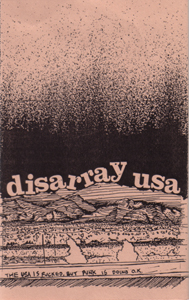 DISARRAY USA
SGD4
OUT OF PRINT

Liner Notes
" After the first Acts Of Sedition US tour which took place in the fall of 2004, we had hand fulls of demos and 7" records from so many of the great bands we shared stages with. We have even more from all the touring bands that have played in our basement here in East Oakland. We thought 'what can we do to to help connect this widespread and excellent punk scene? What can we do to further the relationship of bands across America?' Our answer comes in the form of this comp, which includes bands from 13 states and one Canadian province. All of the songs are previously released. The point of this comp is to spread it around so that lots of bands and lots of fans get to hear a lot of bands, and hopefully discover something new in process. Due to the format of the tape, I am not able to include contact info for every single band, so if there is any band you want to get in touch with contact Stop Go Destroy, and I'll tell you the info I have. Also, most of the bands are probably on fucking myspace. Some of the bands will be broken up by the time you get this tape, as is the urgent and rapid nature of punk. If you are in one of the bands on this comp, and we forgot to ask your permission for your song, get in touch, and we will make amends somehow."

Ah, very idealistic. I'm sure that most of the bands on the tape certainly were on Myspace, and that the social networking website was doing much more to 'further the relationships of bands across America' than my stupid little tape. But I like making stupid little tapes, and that's why I'm still doing it. Again, I couldn't resist putting my own band on there. 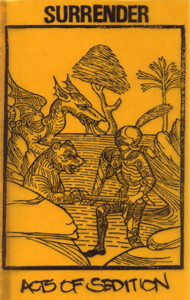 ACTS OF
SEDITION/
SURRENDER
SPLIT
SGD5
OUT OF PRINT

This tape was rushed out for the Spring 2007 Acts Of Sedtion/Surrender Pacific Northwest Tour, when we realized that the seven inch vinyl wasn't going to arrive from the plant in time (story of my life). We then did the deal the deal where you buy a tape, write down your address, and get the seven inch in the mail. It seemed to work out pretty well, and most folks got what they paid for, eventually. 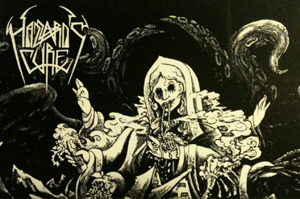 
"Hazzard's Cure play a wizardly hodgepodge of bearded stoner metal, gritty sludge, and blackened thrash with some truly ripping guitars . As the band themselves pointed out, this description "may sound like a trainwreck", but does indeed come across as a cohesive and thoughtfully constructed slab of metal." -The Living Doorway

SIDE A
1. Psilocybin
2. Prayer Of The Hunted
3. Meet Me At The Mountain
4. Tossed And Dethroned

SIDE B
1. Clashing Of Hordes
2. Wolves' Banquet
3. Great Dishonor 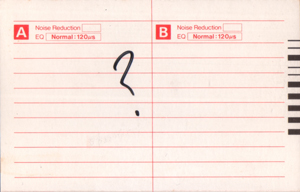 The crew here at Stop Go Destroy Tapes is very excited about the upcoming release of the lost classic Ambivalence Dudes: The Silent Planet. Featuring Dan and Scott from Genesis Climber, this is the secret missing link between such 14th Street West Oakland bashers as Kill Elephant and Ass Mountain, and the super futuristic sounds of Genesis Climber that were to come next. 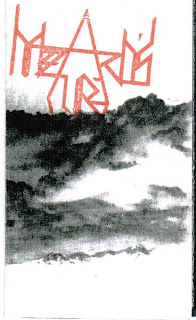 It's back. It's got a bold new look. It's on sale. A little something to tide you over until that full length album comes out. I know you've all downloaded it already, but don't you want a copy to cradle in your little hands; to pop into your old school boom box and blast as you sit on a picnic table in the park and scare small children; to file alphabetically in your pristine collection of vintage metal demo tapes? Of course you do.


Sample Track: Prayer Of The Hunted