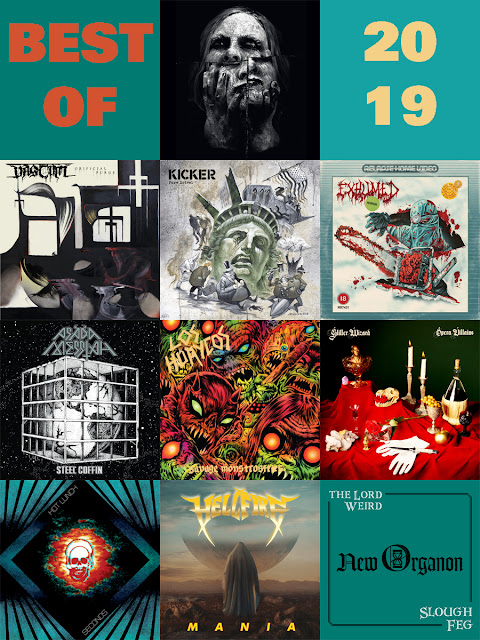 February rolled around and I still hadn't created by top ten best list of Bay Area albums of 2019, nor the survey of local releases that comes with it. I hadn't had the time yet, and there was no clear break in activities coming that would allow me to complete the project. It seemed like I might just have to let it go this time.  Then March came around, and not just my job, but my entire industry evaporated overnight, along with my full time hobbies of band practice, playing shows and touring. So if anything good comes from this recent societal upheaval, I will get some backburner projects completed, and the list of 2019 releases will now finally be published!

As for the top ten list, I think it's a pretty good mix of releases, cutting across the spectrum of what the Bay has to offer these days. One black metal LP, two death metal, two punk, two traditional metal, two rock and roll, and one album that I can only describe as "San Francisco Metal," because it's not so easily categorized.

Just like I've said in years past, I make this list because there are NO publications, print, web, or otherwise that solely cover heavy music in the bay. Every once in a while, one of the top bands will garner some national press, but that's it. Decibel included the new releases by Possessed (no. 6) and Vastum (no. 35) in it's top 40 albums of the year. Metal Assault put Death Angel, War Cloud and Exhumed in it's top 20. Maximum Rock 'n' Roll, now a website, is much more interested in international bands than what's going on in it's own backyard. The East Bay Express covers local music, everything BUT punk and metal, it seems: Hip Hop, Disco, Indie Pop, nothing heavy. Someone please tell me I'm wrong.

Asada Messiah: Steel Coffin
November 3, self released
A just fantastic and fun thrash / stoner / M-E-T-A-L album. It's not trying to squeeze into a genre hole, and I like that. Pure San Francisco style metal. Full disclosure: Yes, I drew the album cover for this.


Exhumed: Horror
October 4, Relapse
Ripping, unceasing gore metal, produced in an airtight, dry as a bone style (that's a compliment) Almost as good as 2017's masterpiece, Death Revenge! The VHS themed artwork is also a big plus. The mood and aesthetic of 80's trash slash horror is well captured.


Glitter Wizard: Opera Villains
April 20, Heavy Psych Sounds
There probably won't be a year when a Glitter Wizard album comes out and it doesn't make the top ten list. Nobody locally is doing anything like this, glam rock with a punk attitude, some heavy metal muscle and some progressive aspirations. Are they taking themselves seriously, or is it a big inside joke? Who cares? Opera Villains is their most pretentious album so far, and that's not a criticism. The whole setup, from the music to the brilliant packaging is fun, engaging, and a step beyond where they've gone before.


Hell Fire: Mania
March 29, Riding Easy
These are our local boys done good, the up and coming bearers of the torch for old school speed metal. They're working hard and they're gonna go far, and this album is an important step on their journey.


Hot Lunch: Seconds
March 15, Tee Pee
In the six years since their last LP, Hot Lunch has remained productive, putting out a steady stream of singles, splits and EPs, but obviously they were saving the most epic jams for this album, the longest clocks in at 13 minutes! Somehow still, they don't stray far from their roots as a skate / garage / retro rock gang. Sandpaper screams, nimble guitar, warm fuzzy bass, and the alternately flailing and precise drums hold everything together. Half of the band has moved out of the Bay Area since the record was released, but I'll still give this to 'em.


Kicker: Pure Drivel
February 8, Tankcrimes
Roadie is like the Larry David of punk, unable to hold back as he rails against the indignities of the modern world, both the small punk world in which we live, as well as the greater world at large. Another solid Kicker album, and with an all star crew of Bay Area veterans driving this boat, a solid Kicker album blows just about every other punk record out of the water.


Slough Feg: New Organon
June 14, Cruz Del Sur
This might be the best one since Ape Uprising! Concise, catchy songs, mostly on philosophical explorations. This band is a local treasure that should be valued by everyone.


Vale: The Burden Of Sight
May 24, The Flenser
Relentless, Bay Area style crust punk black metal, more metal than the demo. Like a little nephew in the Ludicra / Ails lineage.


Vastum: Orificial Purge
October 25, 20 Buck Spin
Here is Vastum doing what they do best: Big, heavy, hairy riffs. Lyrics so disturbing I'm afraid to even read them. "Abscess Inside Us" might be the Bay Area death metal track of the YEAR!

Death Angel: Humanicide
Razor sharp production doesn't save this from being well… just another new Death Angel album, their fourth in what I will call the "Will Carroll" era. Based in the Bay Area thrash metal tradition, it goes a little of course with some too catchy choruses and groove metal breakdowns. Kind of like the last one.

Hysteria: Night Closing In
The most current lineup of Hysteria being half of Hell Fire, including the singer, it's hard not compare them, Hysteria being a little catchier and slower of the two. It's almost like two Hell Fire albums in the same year. Two split personalties of the same band.

Leather Glove: Perpetual Animation
A madman cut loose to do a solo project. Greg Wilkinson from Brainoil, and my bandmate in Deathgrave, did the guitars and vocals, with a variating lineup of drummers. Ominous grindo death metal, it provokes feelings of anxiety, confusion, and eventually utter dread.

Old Grandad: s/t
Mission drug rock stalwarts returned with a new release. Less bludgeoning than their past releasing, more subtlety. They have multiple vocalist and one sounds kind of like Kermit the Frog!

Possessed: Revelations In Oblivion
OG Bay Area death-thrash delivering the goods. Straight ahead, competently played, lacks the quirkiness of their 80's releases of course, not breaking any new ground here, but you can only invent this shit for the first time once, and they did pretty much invent it.


Praying: I'm No Healer Indie fuzz stoner noise doom, it's still heavy, but it's kind of a breath of fresh air from all the chewing on broken glass bleeding out in a gutter in hell death doom that The Bay has been known for latley!


Swamp Witch: Dead Rituals
Four songs clocking in at about ten minutes each, very heavy and focused, a big leap forward for this death/doom/sludge band! They are not entirely Bay Area, but I'm gonna let it slide.

Sweet Chariot: Lean Into The Breeze
Byrdsy / Stonesy twangy rock 'n' roll. As comforting and laid back as a tall can of Tecate and a Burrito on a sunny afternoon.

War Cloud: State Of Shock
While I enjoyed their debut album, it was a dose of rock and roll comfort food, this record shows War Cloud going outside of their comfort zone, picking up the pace, going from a merely rocking level to a ripping level, and getting more adventurous with the songwriting.


AND NOW, HERE'S EVERYTHING, PRETTY MUCH IN THE ORDER IT CAME OUT