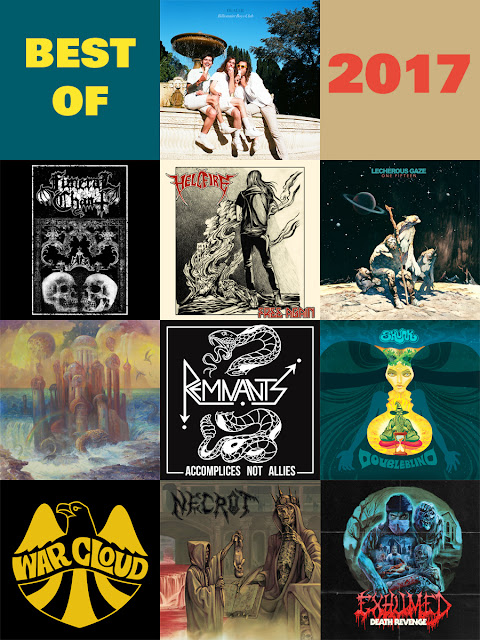 Come late November, everybody and their grandma likes to come out with a "best albums of the year" list. And I always see two problems with that.

One, what's the rush? Why are you so sure you've gotten a complete grip on the releases of 2017 by November? If my band is still struggling to put out our shitty tape by December 15, you would have overlooked that, wouldn't you?

Two, and much more importantly, no one makes a list of the best Bay Area releases of the year, because there are no magazines or blogs, as far as I know, that focus solely on the SF Bay Area heavy music scene. The East Bay Express made a top 12 list, which contained zero punk or metal releases. As one of the sole print publications covering alternative culture around here, couldn't they do a little more? As in, anything? KQED made a top ten list, which also contained zero punk or metal albums. As you will see, if you read through this post, the scene around here isn't exactly dead.  There are a ton of websites and blogs out there, and even a few print magazines still, that give ample coverage to heavy music. But their analysis is wide ranging, and covers releases from Oakland to Finland to Swaziland. Even Maximum Rock'N'Roll, based in San Francisco since it's inception, seems more focused on international punk, and transgender issues these days than covering bands in it's own backyard.

I definitely read through a few top ten lists at the end of the year, just to see if I missed anything, and there was not a lot of love for The Bay! The monstrous new Necrot album, Blood Offerings got the bulk of the press (rightfully so), including a coveted number four spot in Decibel magazine's top 40. The self titled Succumb album made a few lists, and Cormorant's Diaspora trailed a distant third.

Anyway, that's why AGAIN I have taken the painstaking effort to make my own top ten Bay Area albums of 2017 list. Mostly it's metal, but it includes punk, hard rock and whatever else I like. As far as I know, NONE of these releases were covered in any way by the local media.

But without further adieu, here are the...
TOP TEN BAY AREA ALBUMS OF 2017
In no particular alphabetical order

Cosmic Reef Temple: Age Of The Spaceborn
June 6, Transylvanian
Middle eastern flavors, spastic saxophone over a heavy rhythm bed of of rock fuzz. Totally spaced out instrumental psychedelic jazz from Santa Cruz. Something different from everything else on the list, that's for sure! How refreshing! Way into it.

Dealer: Billionaire Boys Club
February 17, Wicked World
Dealer anthropomorphized from their previous band Sexless, and boldly stepped into the scene doing heavy alterna grunge noise rock, calling to mind Nirvana "Bleach" and maybe a more metal Butthole Surfers, just to give a few examples. Using volume it's self as an instrument at their live shows, listening to this record gives you a better idea of what's going on in their shaggy louse ridden heads, if you wanted to know that? Post abdominal surgery caterwauling vocals, fuzzed out guitar, fuzzed out bass, the drums might even be fuzzed out too. But everything is played well, and the songs are structured and riffy. Extra points for the ridiculous album cover, which hearkens back cheekily to an irreverent 90's fuck you attitude. I know these boys, and they are definitely NOT billionaires.

Exhumed: Death Revenge
October 13, Relapse
The album cover is a mock old horror movie poster, and the intro track is meant to sound like the theme song to a slasher flick, which fits the imagery of Exhumed very well, after a few minutes of Friday The 13th / Halloween spine chilling atmospherics, the death metal bursts in, like an axe wielding maniac hacking through a teenager's bedroom door. Nothing new for Exhumed, here. Extremely competent death metal, fine performances from the whole band, very solid, not inventing anything new. Well recorded and some very catchy riffs popping out here and there. Drums as crisp as a Fuji apple, ahhhhh….

Funeral Chant: s/t
February 3, Independent
A short LP, at 26 minutes, I would call this a long EP… whatever, we'll put it in the LPs list, cause I like it! Hate to use such a horrible cliché now, but these guys really do put the FUN in funeral! For being subsumed into howling apocalyptic graveyard, Funeral Chant sound like they're having a good time! Evil, yet somehow exuberant blackened thrash. Solid and entertaining.

Hell Fire: Free Again
August 18, Independent
San Francisco retro NWOBHM / thrash throwback. Always an ass kicking live band, their debut album last year came off a little wooden sounding. Not so this follow up! Hard hitting, punchy dynamic, a killer recording, which captures excellent songwriting and instrumental competence. Topped off by a singer who could be a bizzaro world Bruce Dickinson who is into smoking a pack a day and guzzling cheap whiskey.

Lecherous Gaze: One Fifteen
February 10, Tee Pee
Building on the same sound they've been growing since they formed, but expanding and increasing it. At it's heart, straight up rock and roll, elements of blues rock and proto punk. The weird singer keeps them raw and scary. Includes these rare mysterious, eclectic, dare I say cinematic moments? Subtle keyboard parts suggest more complex moods, and of course OUTER SPACE STUFF. It's a very well recorded and put together album.
https://www.youtube.com/watch?v=zLiYxxdNAzA


Necrot: Blood Offerings
June 9, Tankcrimes
I don't know what kind of death metal you call this exactly, but it's my favorite kind. Just the right balance of brains and brawn, of melody and brutality. There much more brawn and brutality of course, but that's what brings the Death. The power trio, an unusual format for DM, make a bold appearance here, sounding extremely tight and agressive. As I dug through the piles and piles of Bay Area metal releases that came out this year, the largest category ended up being Black//Death metal, and Necrot was at the top of the heap with this release.

Remnants: Accomplices Not Allies
June 30, Mierda Mierda Mierda
San Francisco punk is extremely proud of representing the unrepresented and disappearing underclass of their home city. Very energetic drums drive the band, and the bass lays a rock solid foundation for the guitar, which jangles and sometimes soars on waves of dark but flamboyant reverb over all else. Very political lyrics shouted in yer face by what sounds like an idealistic teenager. A crucial look at what was going on in the streets in the lasts days of Ed Lee's yuppie hell hole San Francisco of 2017.

Skunk: Doubleblind
April 20, Fuzzy Mind
A singer who sounds like a stoned out Bonn Scott prances across the back of a merry crew, workmanlike in their ability to crank out surprisingly authentic sounding seventies riffs, I'm hearing some early Rush, Grand Funk, Leaf Hound, stuff like that. It's not too cut 'n' paste, it rocks and it's very fun! They talk about smoke a lot in their songs, so they must like, uh, camping or something?

War Cloud: s/t
September 8, Ripple
If you want a meal that includes comfort food in every bite, then this is that meal! It has bacon! And mashed potatoes! And apple pie for desert! And I obviously don't mean that in a bad way, because here it is, in the top ten! Motorcycles, witches, deserts, mountains: you want that classic stoner metal meal? It's in here! Same with the riffs. Warm, buttery guitar harmonies immortalized on analog magnetic tape. Guitar solos scattered liberally throughout, like the errant peas upon your plate. As reassuring and familiar as grandma's spread at Thanksgiving, it'll slide down your gullet, fill your gut and leave you satisfied!


SHAMELESS SELF PROMOTION:
2017 RELEASES THAT I PLAYED ON
Looks like 2017 was an interval year, 2018 will be much more productive indeed...

LIST OF OTHER 2017 BAY AREA METAL AND PUNK RELEASES AFTER THE JUMP!

DEMO
Bone Awl: The Lowest Road
Disincarnation: By The Old Gods and the New
Excretor
Vale